Get the most recent issues of Dodo Comics for the low prince of $8!!

Get the most recent issues of Dodo Comics for the low price of $8!!

A collection of short black and white comics including the Yup’ik story, How the Raven and the Loon Got Their Colors as well as several experimental comics such as a palindrome comic.

” a thoroughly engaging comic from top to bottom” Optical Sloth

“I really enjoyed this comic, not only for the stories which were original and well told, but also for the art and the way in which each story was laid out. ” Almost Normal

The first story is the first chapter of Medusa, a reimagining of the classic tale from Greek mythology. Medusa asks the question, could Medusa actually be the hero of the story?

The second story, it another story based on the Saying of the Desert Fathers and has all the exorcism and excessively drawn detailed drawings you’ve come to expect from Thomas’ treatment of these stories.

Dodo Comics #6 begins with a continuation of the reimagining of the classic Medusa tale from Greek mythology. Medusa asks the question, could Medusa actually be the hero of the story? This issue reveals big twists and finally sees Medusa use her famous petrifying powers!

The second story, is a quiet meditation on the precarious and awe-inspiring ecosystem of the Florida Everglades. 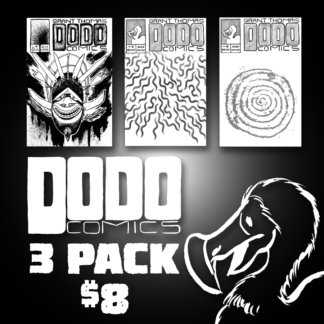