This week I completed Flannery O’Connor’s Complete Stories, which I began blogging about here.  last week, I wondered if I would find another story, that i could include in my list of favorites and in fact I did.

The story in question is, Parker’s Back, which is about a man covered with tattoos who marries a very strict, ugly, Christian woman.  The man is described as covered in tattoos except for on his back and the woman will not even cover her face with make up.  I like the symmetry of how they are described- covered and uncovered. 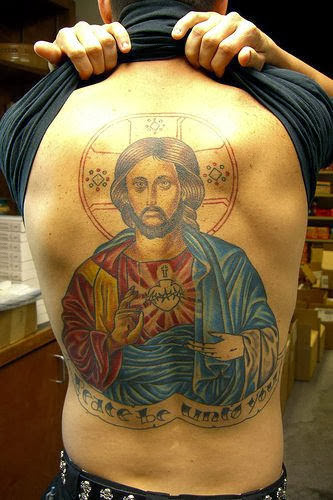 The woman hates his tattoos and asks that he always keep them covered by clothes.  I eventually tries to get a tattoo that he thinks she will approve of.  Parker goes to the tattoo parlor and looks through the book of designs.  He is drawn to an image of an Eastern Orthodox icon called the Pantocrator, which depicts both the judgement and grace of Jesus.  Normally, he can fall asleep as he is being tattooed, but he is restless and stays awake during the two day process and has a spiritual awakening during this time.

I won’t give away the ending, because you should read it.  If you decide to read O’Connor and you don’t want to wade through every story she ever wrote like I did, I recommend the following:

Good Country People – If you have to read just one, this is the one to read.  Its a very humorous depiction of what happens when you take Nihilism to its logical extreme.

Temple of the Holy Ghost